Innovation Visual On Tour! The Team Take a Trip To Poland

The Innovation Visual team recently enjoyed a trip to Poland to visit our colleague Oktawiusz. On Thursday night, the team headed to Luton airport to begin our Poland adventure. After enjoying the Thursday night M25 traffic, we reached Luton in good time before boarding our flight bound for Katowice International Airport.

Landing in Katowice, the team were immediately met by the cold Polish air as the doors opened. Luckily, after the recent snow falls in the UK, the team have had time to acclimatise to such a climate. Alex took it one step further, mustering the courage from his days up north at Newcastle University, to walk towards the terminal in just his t-shirt despite the cold temperatures. 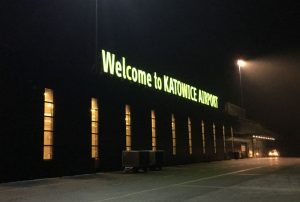 After picking up our bags, we were met at arrivals by Oktawiusz and made our way to our vehicle for the trip, an Opel mini bus, providing plenty of space for the team and our luggage. The hotel was located in Katowice City centre and after arriving at 1am, it was straight to bed for the Innovation Visual team!

They say breakfast is the most important meal of the day and the team were treated to an all you can eat buffet, giving us the perfect start to the day. Certain members of the team certainly enjoyed going up again and again for more food to make the most of the buffet!

We were met at the hotel by Oktawiusz before driving to Krakow to explore the city. Krakow is located in the south of Poland near the border with the Czech Republic and is well-known for its beautiful medieval architecture. 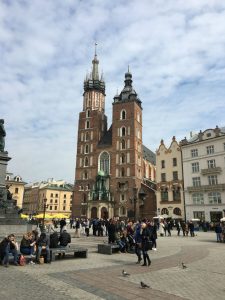 Once we had parked on the outskirts of the city, the team started walking towards the centre and soon arrived onto the expansive Rynek Glówny (market square) and were immediately struck by the site of St. Mary’s Basilica, a gothic church dating back to the 13th Century. Our first stop was to visit the church and experience a truly incredible example of medieval architecture, featuring spectacular internal wall detail, stain glass windows and incredible paintings.

There was plenty to see in Krakow and the team enjoyed wondering through the city up to Wawel Castle, one of the largest castles in Poland. In the past, the castle was used as the place of residence by the kings of Poland. Today, it is used for a different purpose, being one of the country’s premier art museums.

Making our way down the hill from the castle, the team were lucky enough to discover the fire breathing Wawel Dragon. The legend goes that the dragon lives in a cave at the foot of Wawel Hill, but the Innovation Visual team were pleased to find the dragon perched on a rock residing on the banks of the Vistula River. 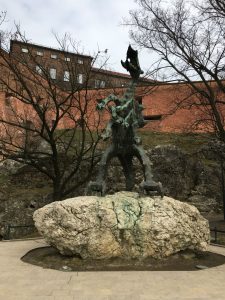 After a good deal of exploring, the team had worked up an appetite and stopped for lunch at Czarna Kaczka (The Black Duck).

The team enjoyed tucking into a delicious traditional Polish lunch and sampling the local beer. We would certainly recommend the restaurant to anybody visiting Krakow, as it was thoroughly enjoyed by all.

Following lunch, the Innovation Visual team explored more of Krakow, before all too soon it was then time to leave and return to the hotel to get ready for dinner back in Katowice.

Prior to leaving the hotel for dinner, the team made the most of the sky bar at the hotel by enjoying a few drinks and taking in the amazing night time views over the city of Katowice.

Before dinner, we made use of Oktawiusz’s local knowledge to visit a bar with its own microbrewery and sampled the local beer. It was then time for dinner at the Tatiana restaurant and the team were certainly not disappointed. Steak was the popular choice for the majority of the team and it was simply delicious.

If you visit Katowice, then the Tatiana restaurant should certainly be somewhere you visit. The team left the restaurant very impressed with the meal and returned to the hotel in good spirts, perhaps helped by the effect of the vodka!

Day 3 – The History of Poland

After another lovely breakfast, it was time for the team to checkout of the hotel and explore more of Poland.

A visit to the Silesian Museum was the agenda of the day, which offered the opportunity to learn more about Poland’s eventful history and understand more about the country.

It was incredible to find out more about Poland’s past and the impact World War One, World War Two and the wars aftermath had on the country. Perhaps the standout statistic was that an estimated 5.7 million Polish citizens died as a result of German occupation during the Second World War. The museum certainly left an impression on the team and everyone left with a much better understanding of Poland’s past.

Oktawiusz then treated the team to a spectacular view, driving us up a mountain to a vantage point offering incredible views over the surrounding area.

Unfortunately, it was then time for the Innovation Visual team to say goodbye to Oktawiusz and Poland, and return to the airport for our flight back to the UK.

It was a great trip for the Innovation Visual team to experience Poland and enjoy a weekend away together outside the office.

The UK team would like to thank Oktawiusz for having us and Tim for organising the trip. We are all certainly looking forward to the next Innovation Visual Tour! Hint hint, Tim!