For the past few years, Innovation Visual have been delighted to sponsor young Taekwondo star, Phoenix Goodman. We’d love to share the most recent update from her on her exciting progress in the world of Taekwondo since her last update in May 2021. 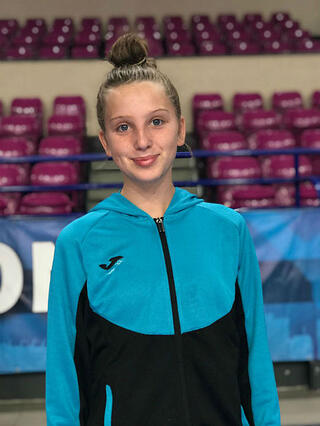 At the start of May I travelled to Manchester for a weekend camp with the GB junior development team along with other girls who are in the development squad! The training camps take place every two weeks at the National Centre of Taekwondo and the coaches push us athletes to work on the latest trends and assets which we can add to our personal game strategy. This adds to my development as a taekwondo athlete, providing me with the opportunity to train with some of the most talented athletes across the country in the sport of Taekwondo. This was the first of the residential camps since the pandemic, meaning we could stay overnight to double our training and make the most out of the centre. The weekend consisted of two days of two, two hour sessions focused around kicking conditioning, co-ordination, movement, leg control, strength and conditioning, and competitive situations

On the 5th of May, an organisation which provides me with financial aid known as SportsAid hosted a zoom call on sleep, posture and environment. They provide these zoom calls frequently and I find them extremely beneficial.

On 17th May I cooked some nutritional foods via zoom call with my GB team and nutritionist which helped me with nutritional values and what foods are best for energy and for building up muscles after tearing them in training.

I had more residential camps during May, where I trained at the centre in Manchester and took on lots of feedback which is always so handy because I can go back to my club and work on the constructive criticism and make myself better.

In June, on top of two more residentials, I went to Doncaster to train with a team I have represented in the past and love training with because the coach, Kathy Hook, really pushes me. There is a wide variety of people I can train with, which is always nice because it makes training for competitions more realistic because in a competition you may fight people you have never fought before. The session was 3 hours mainly based around sparring.

The Taekwondo section of the Olympics took place on the 25th of July and it was so emotional and joyful for me to watch some of my idols compete, it’s something I aspire and look towards achieving every day. It made everything seem so real and possible because they train at the same centre as me and that could be me one day!

The 25th of July was also my last residential camp with the GB development squad for the summer and it was a lovely send off to some people who were graduating due to age or choice. It made me feel so privileged to train with the best and to be given the opportunity to improve with the help of my teammates and coaches.

Selection For the European Championships 2021

On the 20th August, I was in Manchester for a very big day! This was the team selection for the European Championships 2021 located in Bosnia. I had to compete in 2 test matches to test my ability to work under the scoring system. I had to fight everyone in my weight who would be considered to be taken to the championships and show the coaches I was their best option. I won both fights on the day, so I am very happy about that.

On the 25th of August I attended something called ‘Phase 1’, which is for a number of athletes who were chosen by their applications to complete Phase 1 to see if they were capable for Phase 2 and if they were and the GB development coaches were impressed, they would be let onto the team! During Phase1, lots of athletes came and tried out for the team and 80 athletes were then admitted into Phase 2.

Fortunately, I was one of them and I attended Phase 2 on the 19th of September. Whereas Phase 1 consisted of test matches without the scoring system to relieve pressure on athletes and give them the opportunity to show what they’ve got, Phase 2 consisted of a residential training camp to see if athletes could keep up with high intensity training!

On the 5th October, the team they are taking for the euros was announced and I am delighted to announce that I was selected for the European Championships this year which I am extremely happy and proud about! In preparation to this competition, I will be attending a week long training camp in Croatia which I am very excited for! This is my second major championship I have been selected for and because the last one was cancelled due to Covid, this means a lot to me. You can see the announcement tweet announcing the full line-up here.

Preparing For the Championships

I travelled up to Durham on the 22nd of August for test matches with the Whiston Taekwondo team and I had 2 fights and really enjoyed both! This was good preparation because ring time is vital after so long of not being able to compete.

On the 29th of August, my local club, LMC, hosted an inter club down in Southampton which means test matches as training, so without medals and weights. I had 3 fights and won all of them and it was really nice having other clubs down and once again, it was great to get more time on the ring in preparation for upcoming competitions.

I went up again to Manchester in September to attend the Lauren Williams (GB silver Olympic medallist) Seminar hosted by British Taekwondo which was really beneficial and it was so nice to see one of my idols who recently competed in the Olympic Games. This seminar was 4 hours of hard work.

In between all of this, I train around 3 or 4 times a week with my club LMC hosted by Max Cater and I do lane swimming at least twice a week. All of this is extremely useful, but I make sure to have rest days as well because recovery is an important part of my sport!

As you can tell since COVID-19 restrictions have been relaxed, I’ve been extremely busy, but I love what I do, so I enjoy it so much! More upcoming competitions should be happening locally at the end of this year and competitions abroad early next year so very exciting!

We are extremely happy to be supporting Phoenix’s journey, she is an exceptionally skilled athlete, and we can’t wait to see where her passion for the sport takes her next. You can keep up to date with her progress by following her on Instagram.