We at Innovation Visual are over the moon to announce that Phoenix "Fi" Goodman; our 11-year-old sponsee, has won yet another Gold medal!

Fi had 3 fights in which she did phenomenally! Her efforts played a significant part in Team BTS (British Taekwondo South) winning the overall team trophy for the first time in 13 years! 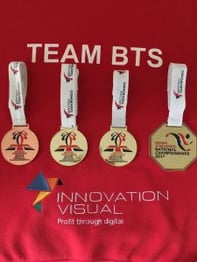 BTS are a designated “GB Talent Club” formed by Master Joe Brown in 1981 and over the years have competed up and down the country and even across Europe! Fi has been described as a focused, committed and hardworking young athlete who is bound for the Olympics with the amount of talent she has.

To the future and beyond!

This huge achievement gives Phoenix an even bigger boost to achieving her dream representing Team GB in the 2024 Olympics being held in Paris, which we are honored to support! So, a massive well done to you Fi and the BTS Team, we can’t wait to see what the future holds for you!