Innovation Visual continue to sponsor rising Taekwondo talent, Phoenix Goodman and we are delighted that she has shared an update of what she has been up to in what has certainly been a busy month for her.

By Phoenix Goodman herself: 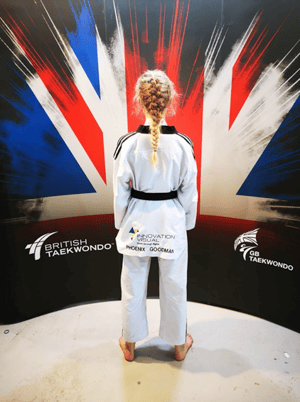 'In preparation for the National Championships on the 9th November, I got invited to attend a training camp weekend. I travelled to Ireland on the 1st November to train with Champion Taekwondo Ireland Team on the 2nd and the 3rd for 5 hours each day. On the first day we did intense training and I learned lots of new techniques and combinations of kicks. I had lots of different training partners, some both my age and weight and some a little heavier and older but it was a good experience! On the second day of training camp was test matches on PSS which is an electronic system used in competitions. I had 8 fights on and off PSS but overall the weekend was brilliant preparation and was really useful and I enjoyed it a lot!'

On the 8th November, I travelled to Manchester to compete in the most prestigious, advanced and rewarded competition in the UK, for English athletes to compete in. Only 6 weeks after a having a nose operation due to an injury, I weighed in on the evening of Friday 8th November and on the 9th competed. It was my first competition where I was under my new team, LMC and my new coach, Max Cater. I fought in the -44kg advanced Cadet category. I had four matches and I am extremely proud to say I won all of them, resulting in a gold medal! I was so proud and as soon as I was announced as the winner, it was genuinely the best feeling ever and it was a personal achievement because of the tough time I have recently had recovering from my injury.'

'On the 23rd of November, I travelled to Doncaster to train with Team Ultimate along with lots of other clubs. I had a brilliant time and have taken lots of techniques away with me to work on. It is always lovely seeing my team mates and coaches from Team Ultimate.'

2020 isn't far off and Phoenix is dreaming big for this year. Phoenix has recently been given a list of competitions from her coach that she is down to compete in next year including the Dutch Open from the 6th-9th March and the Luxembourg Open on the 13th to 14th June. These two competitions are even more important as they are qualifiers for Europeans and she will longer be counted as a Cadet but a Junior from January onwards which is based on being in the 14-17 age bracket.

Innovation Visual would like to congratulate Phoenix on her win at the National Championships and we are certainly looking forward to hearing she does in her 2020 competitions! We will be supporting her every step of the way!