At the beginning, before canonicals and structured data markup Google had two users, one being the content creators; the people creating what makes Google so special: it’s content!

Secondly, there were the content consumers. These are the people who search Google to find anything from funny gifs of cats to educational information; that without Google would’ve taken far longer to find.

In this period, when the internet was clean, innocent and not largely a breeding ground for tolls and bots to spread misinformation and influence long established systems of democracy, content consumers and creators lived happily side by side in a mutually beneficial symbiotic relationship. But then something happened?

How did Google become the search engine giant? 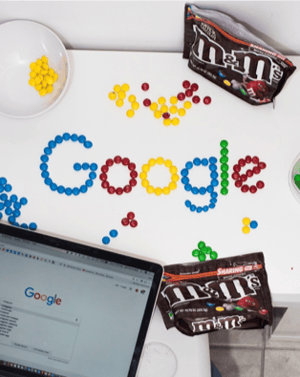 There are many reasons why Google has become so huge, some of it good and some not so good. Google Search engine is still recognised as being the best around, nothing really comes close. Some reasons for this view are as simple as it’s ‘become the norm’ whereby the “snowball effect” has happened. The “snowball effect” refers to the process of when something builds up pace, growing more like a snowball, until an idea goes from a few people, to many, to then finally a consensus where everyone agrees.

It could be argued that Google has now established itself as the ‘big daddy’ of all search engines. But this has countless effects on everyone as it means there’s little to no competition; they they can get away with almost anything!

However, when this consensus was agreed, little did anyone know of Google’s intentions for the platform and the future of its content creators. Since the birth of Google’s platform (which has recently turned 20 years old) there has always been competitors, other platforms who are trying to do the same thing as Google. Companies such as Ask Jeeves, Bing, Ask, Yahoo and Baidu have all been provided alternatives to Google, some with more success than others. But most have simply faded from existence and if they are still available they are mere shadows of what they could’ve been.

In fact, users are so invested in Google, they are not only using the platform for SERP’s (as originally intended) they are using it for YouTube, Maps, Email, Cloud Services, Photos and more.

Google and its parent company Alphabet are also one of the only companies who have both its own search/internet platform and also their own OS (operating system) with only Bing having also achieved this; it could be argued though Google went from a Search Engine to and OS whereas Bing formed the other way around.

With Google having created the success of Android, Google can now infiltrate our phones, watches, cars and more. It’s true to say we are never far away from a product or service that either uses Google or is controlled by Google. Google’s massive size seems to have created such a gravitational pull of not only users but also all the different aspects of life. Who knows what Google will do next. Maybe they’ll create the next SpaceX.

On the other hand, Baidu is one of the only search engines to date that can still compete in Google’s monopolised market. However, this is still only in China and when compared to the breath of countries where Google is used, Baidu is incredibly small in comparison.

Google is now such a dominant force in the world it has no real competitors. Google is able to set its own benchmarks and its own standardisation rules and make the lives of content creators as difficult as it pleases. And because all the content consumers are on their platform; no one can afford to not be working with Google.

In a recent study, users were asked to choose between two SERPS one being Google’s SERP and the other being Bing’s SERP. It’s often argued people use Google because it gives the best results. However, in this study the experimenters switched the logos around. Allowing for the experimenters to see if this hypothesis is correct. However, when given the option between the SERP’s people almost always choose Bing with Google’s logo.

So why don’t people use Bing more? Many argue it’s simply because Google has become the benchmark and the standard for so many things in our lives. Users expect Google to be the best, so they’re blind to anything else.

“Google is changing to become as helpful for the user as possible, isn’t that a good thing” – Silly Person

Unfortunately, although this sentiment is valid, it is also completely ignores the people who have helped create the platform as we see it today. There are many ways that Google can help the content creators and also give a better service to its users. However, Google seems to have forgotten this.

You can further see how Google now only works for the users and not the content creators through its use of previewed content at the beginning of SERP’s (Search Engine Results Page). Through developers being forced to give Google detailed and comprehensive information on their sites, Google can now remove the need for that content altogether – by giving them the information they wanted before they click.

As you can see in the below image, it’s no longer the case of viewing content on a site, it’s about the instant gratification users need on the web. Google believes users need to see the information as quickly as possible, so they remove the middle man; which just so happens to be the content creators. And there’s nothing you can do to stop them. It’s the content creators who gave them access to be able to do this, in the first place. 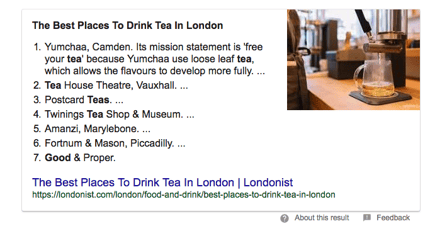 You can see examples of Google implementing this kind of strategy throughout their platform from AMP pages to Google utilising information from huge numbers of sites to show results for searches such as “movies 2018” and more. The danger is however, that people will never visit your site and your organic traffic is going to dramatically decrease; as this method becomes more and more common. You may have even noticed this recently.

In fact, for the first time ever, the number of clicks available throughout the web from SEO; which had always historically been increasing, is now decreasing. Arguably largely in part to this strategy by Google.

Google is not alone

It’s important to remember, however, that Google hasn’t been the only one looking to keep people in their ecosystem more and more. In fact, it can be seen throughout almost all the major service providers. For example, when Facebook gave the addition of instant articles or Instagram preventing outlinking in posts.

All these and more are just examples of companies making it harder for the content creators. And not always are they for the benefit of the users.

Content creators are likely going to notice a decrease in organic traffic and clicks, you will also find you are going to have to work even harder to get the same results as you did before.

Further to this, it means that it’s very unlikely that the general consensus around Google is going to change anytime soon. It means content creators are going to have to keep sticking to Google’s best practices, there ranking requirements, and more.

However, even after all this negative news, it has never been more important to ensure you make the most of your website and focus your website at the centre of your marketing campaigns. As this is going to be the driving for behind your conversions/leads and almost any goal you might be aiming for.

Although we may not agree with Google’s focus on the user, completely, we do have to optimise for it; including all their services which they favour i.e. YouTube, Maps G News and more. If you don’t optimise and we going to see more and more people not directly looking at your sites, and you’ll run the risk of alienating the people who you most want to see your brand

In addition, you can try an offer something Google and other services cannot natively do. Content creators should focus on building interactive and unique content that Google cannot steal, and users are going to enjoy and keep returning to.

Other methods of optimising for SERP’s are as follows:

But even with all of Google’s developments and changes it doesn’t mean you have to be submissive, it’s up to every content creator to make sure Google doesn’t forget about you. Without the content creators, Google doesn’t have a platform. Don’t let Google forget who they owe their success and thanks too.

If you would like help developing your SEO strategy the Innovation Visual team would be happy to help! Contact us today to talk to an expert.