For the second year running, The Innovation Visual team flew out to Poland for a weekend of team building, adventure and to see our colleague, Oktawiusz. Leaving the office slightly earlier on a Thursday afternoon, the team headed to Luton Airport to catch our flight to Katowice International Airport.

Landing late in the evening, we were greeted by a smiling Oktawiusz at Katowice Airport. We then made our way to the minibus transport that we had hired for the weekend and set off to our first hotel; located in Katowice. After we checked in, the team headed straight for their beauty sleep in preparation for the fun activities the next day.

Breakfast with a view

The following morning, after a much-needed sleep, the team woke up fresh faced and raring to go. The hotel overlooked a beautiful, tranquil lake so before checking out, we got the chance to experience breakfast with a view along with some great food (some people were even tempted to take some doggy bags away). 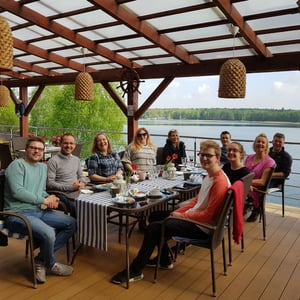 After fuelling ourselves up for the day, we hopped on our minibus to drive North to Bialka Tatrzanska where we would be staying for the rest of the weekend.

Arriving at the Pensjonat Burkaty

For the next two nights, we stayed at the picturesque Pensjonat Burkaty hotel; complete with it’s own bowling alley, spa, gym, games room and restaurant. After a 3 hour drive, the team were feeling a little peckish so quickly dropped bags in rooms and headed out for a delicious lunch.

Lunch was the perfect opportunity to experience a bit of Polish cuisine for the first-time, including dumplings and sauerkraut. And it was at lunch, that the team found out all about what was in store for the afternoon’s activity; a competitive team challenge.

Oktawiusz and Tim had been a little secretive as to the full itinerary in the week leading up to the weekend trip.

However, little did we know is that they had planned for us a Polish-style Apprentice Challenge. Team Captains, Helen and Hannah were selected at lunch, with Dr Jo, Charlie and Sasa ending up on Helen’s team and Jo, Pete and Clotilde on Hannah’s team.

We were given a sheet of A4 paper with all the instructions for the challenge on, which included sourcing Polish food, finding national emblems and symbols and taking a picture with the team on a slide. Plus, this was all made harder due to the fact some of the language on the sheet was in Polish – not most people’s first language! The hardest task was getting a video of a person talking about Innovation Visual’s digital marketing services in Polish!

To be victorious in the challenge, it was the team who acquired the most on the list with extra points being awarded for bringing back more cash. Neither team were prepared to lose but it was Helen’s team; the Murray Mints who came out on top! The challenge definitely brought out our competitive sides but it was also a great way to bond with team members whilst exploring the town (and luckily the sun was shining too)! 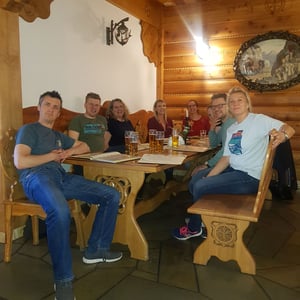 After the challenge and working up an appetite, it was just about time for dinner. The team enjoyed dinner in the hotel for the evening, with drinks flowing and people dining on delicious steak, fish and chicken.

After dinner, we decided to make the most of the hotel by making use of the games room - complete with table tennis, air hockey and table football. Needless to say, our competitive sides were brought out once again! Some members of the team even headed out for a drinks in the town centre although most of us headed to bed that night in good spirits in preparation for a relatively early start the next morning.

Whilst there were a few sore heads flying around the next morning, it was nothing a good buffet breakfast wouldn’t sort out!

After filling our faces, it was time to head out on a real adventure, with a hike up the Tatra mountains. We hopped on the minibus once more and headed on a relatively short drive towards the mountains, with a few stops along the way to take in the breath-taking scenery.

We parked up and began our walk up the mountains taking in the spectacular views every step of the way. The walk was quite a considerable distance, so we made sure we had plenty of snacks and water in our bags. After walking 10km up, we did however stop for a spot of lunch and to rest our feet.

Some of the team walked a little further up to explore the lake on the mountain before making our journey back towards the van! It was safe to say that after walking a total distance of close to 22km, the team were ready to put their feet up and relax in the car journey back. Although what’s more, is that we are lucky to be able to say we went to two countries during our weekend trip as drove through Slovakia on the way back! 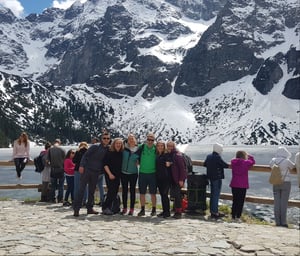 Blissfully Relaxing in the Spa followed by Dinner

We had some downtime once we arrived back to the hotel with many of us making use of the spa facilities – particularly after the long walk! The jacuzzi and sauna facilities were just what was we needed!

We enjoyed another delicious dinner and drinks in the hotel that evening before we decided we should have our very own pool competition! In teams of two, we took to the pool table with the winner staying on each round! After 5 rounds and 5 victories, Pete and Helen were named ‘Pool Champions 2019’ and enjoyed every moment of the glory.

After a jam-packed few days, it was time to head back to Katowice Airport and to fly back to England. We packed up our bags and drove from North Poland towards Katowice, making time to stop for one last supper before the flight home.

It’s safe to say that the whole team had a fantastic trip away, especially enjoying time together outside of the office environment!

Thanks to Tim and Oktawiusz for organising the trip and we're all looking forward to the next one!