The Innovation Visual team recently got the chance to attend a great event taking place at the British Library in London, Creative+Opportunity. Organised by Hill+Knowlton Strategies, the event was a brilliant day of networking, talks and discussions with some of the top business voices across the industries concerning the involvement of technology in entertainment, innovation, communication, ingenuity and society at large. The event also explored how to embrace the power of change and opportunity.

Some of the talks included ‘The Power of Opportunity to transform business’ delivered by Mark Read, CEO of WPP and ‘how XR can be used to enhance communication,’ presented by Candace Kuss from H+K and Daniel Cheetham from Happy Finish.

This blog gives a round-up of some of the key takeaways of the day and how the power of technology can be embraced in business. 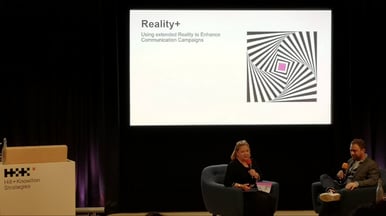 Technology in entertainment is undoubtedly trending away from linear consumption and towards on demand needs and, amongst the industries, sports viewing is primed to take advantage. Televised matches and games kept consumers tied to cable providers, but on demand content has huge opportunities for pre and post interactive commentary. As well as immersive experiences for those not in the stadium. Personalised commentary with the preferred language and even commentators biased towards a specific team. Of course there are limitations – VR might not be the best tech to watch a match with friends, but the use of this outside of the live game is an exciting prospect.

Technology works when it is simple. No one uses a Snapchat filter thinking of it as an Augmented Reality tool, they want a filter and there it is at their literal fingertips. Seamless integration provides the tools with which to create and empower the user. The technology itself is almost invisible as it is the user experience which is driving change. The algorithms used by Spotify enable greater interaction and information to the user, whether this be professional artists or small producers, to allow the fans to get closer to the content.  Putting these tools into the hands of the users is key to this process.

Simplicity of use makes technology stick and the user far more likely to further engage.

Voice search is making content even more readily available, accessible and discoverable. Whereas the opposite trend was observed for some time, viewers and users are now moving back towards using and appreciating sound as an important factor in their content. Voice is clearly also important in the ongoing growth in social gaming, where players communicate with each other worldwide. The emotional engagement promoted by sound, be it music, voice or effects is undeniable.

Whichever way you look at it, technological advancements are creating an improved experience where the audience are the winners. Technology driven change is not new; stories, whether written or told by word of mouth are still the most powerful form of communication. Empathy through shared human experience is key.

Mixed reality has been used effectively to incite empathy between different groups - Ford’s successful use of MR technology to decrease hostility between drivers and cyclists gained 63million impressions globally, demonstrating the wider implications of correctly implemented VR.  In 2015 the New York Times’ campaign “The Displaced” used multimedia to highlight the plight of those displaced from their homes by war and persecution.  As part of this they distributed Google cardboard VR sets to readers to enable them to see through the eyes of displaced refugees, with the aim of increasing empathy towards this highly vilified group.

Providers have a responsibility to ensure that users are included and not alienated by economic circumstances. Improving the player experience is key and this should be heralded as the main aim. No one should be forced to trade their data for a superior user experience. Technological advancements should not be allowed to alienate those who do not have the latest handsets or computers. Spotify Lite, for example, allows many more users to continue to engage and become a part of the community.

Inclusion is the vital ingredient. Anyone can now be a creator; users are not simply consuming content but creating and critiquing on a mass scale. Technology companies cannot only put out content for consumption but must be acutely aware of the active dialogue with their audience and between their audience members. The ability to interact with friends and make connections is how people are brought in. Gen Z are more concerned with micro communities and individual experiences with which they can invite close friends and create content and consumption is moving away from mass social media.

Social media is well developed in its ability to reflect the trends and opinions of society, but it is also important to understand the role of social technology in shaping culture. As new generations are outstripping the previous in terms of demanding inclusivity and social responsibility it is vital that tech evolves to incorporate the ways to communicate and thrive. No longer is content dictated by the companies or the celebrities but by everyone and anyone who has a voice and wants to be heard. Much of what is being shared now is pro diversity, positive and seductive as it celebrates new voices in culture and gives those who may not have had the opportunity before.  social media and technology are providing platforms on which to be seen and heard. This pushes new creativity and culture to the fore for new and hungry audiences who want to see themselves represented in the wider world. 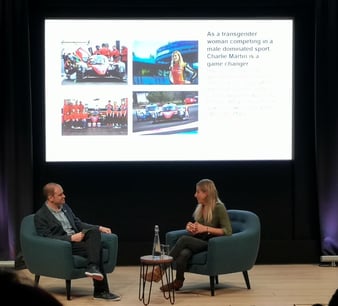 A discussion with Charlie Martin highlighted the importance of challenging the norms and demanding representation in industry and the media. Charlie is a transgender woman cutting a swath through the male dominated racing industry by championing the cause and calling for the normalisation of LGBT representation in motor sport. Charlie recalled that she almost gave up on racing, following her transition, and took a year out to consider her own health and wellbeing.  Having a supportive community around her, both in and out of the racing community allowed her to re-engage with her passion for racing. The online support that she has garnered has boosted her resolve and Charlie aims to be the first trans woman to complete at the 24hr Le Mans.

Ben Ryan of Ambionics spoke passionately about his experience of being a father desperate to help his son, Sol, after his left arm was amputated soon after birth. The entire auditorium was emotionally affected by his story and the trials that he experienced whilst battling the worlds of healthcare, funding and patent law in his mission to develop a suitable prosthetic. The clock was running down quickly as he raced to get a suitable prototype before the critical age of 2 and a half years, when synaptic pruning would mean the likelihood of Sol being able to cognitively accept the limb would be significantly reduced. 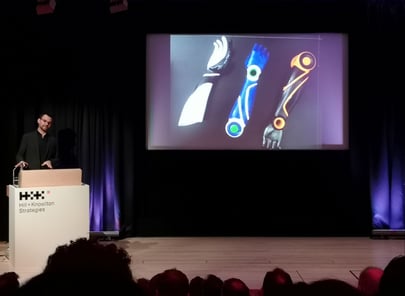 Funding from Microsoft allowed Ben to 3D print a suitable arm which Sol now wouldn’t be without and later his partnership with Glaze prosthetics has meant that he has been able to patent and develop further models, created by a process of HP Multijet Fusion. Different hands are now available for different functions such as playing and eating, and he is even developing an integration for a Bluetooth speaker!

His designs have been inspired by the technology available, yet he has been dedicated to a grounding in the medical domain to ensure the safe use and application of his designs.

This was an exciting event to attend and the words and ideals that kept recurring were clear.

Technology has limitless possibilities, but to succeed it must be empowering, representative, seamless and inclusive.