Why Investing In A Recession Helps Businesses Survive & Thrive

While investing money in any business activity during hard economic times seems counter intuitive, there is strong empirical evidence that businesses who invest strongly in effective marketing during downturns achieve better ROI on their investment and emerge stronger, more stable and with greater visibility and market share.

Why Does Investing In Marketing During Recession Make Sense?

There are a number of reasons for this and while every recessionary period is different, a multitude of studies have shown that there are patterns to be found in consumer behaviour that remain consistent throughout. These patterns enable businesses to strategise based on experience and develop a plan to push growth through recession.

In the 1920’s, researchers Roland Vaile and Reavis Cox studied how businesses reacted to the recession of 1920/21 by examining three groups of businesses. They were those that did not believe in advertising, those that reduced advertising spend in response to the downturn and those that actively increased advertising spend in the face of recession. They published their findings in The Harvard Business Review in April 1927. The graph below shows the findings of their research and shows that those businesses that increased their ad spend during recession, grew faster both during the recession but also across the three years afterwards. 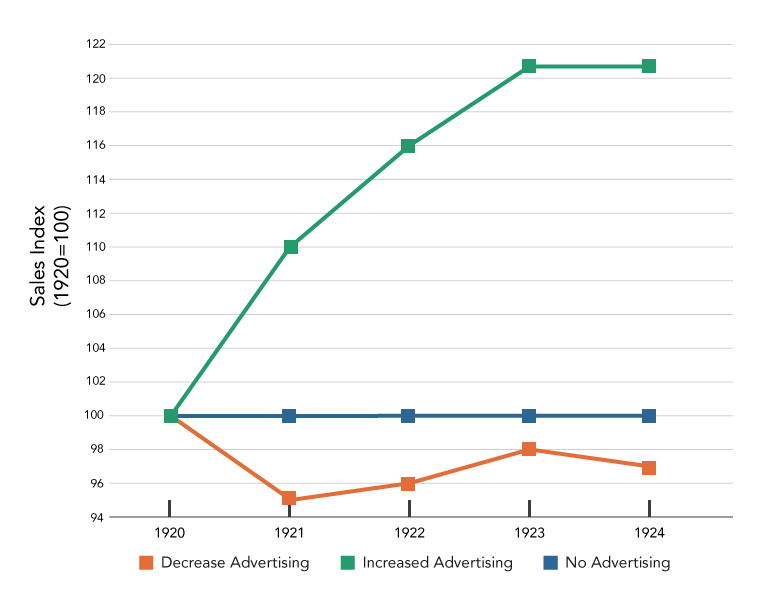 Vaile, Roland. The Use of Advertising During Depression - Harvard Business Review - April 1927

While it’s tempting to discount these results, they have been repeated in every major recession since. Over the last century, there have been many similar studies that have reconfirmed the main findings, that maintaining or increasing marketing spend during economic downturn enables businesses to better survive the recession and grow faster once out of it. Advertising theory pioneers Stephen King and Alex Biel performed similar research published in 1990, examining the performance of companies during periods of recession. They divided their study sample by companies that reduced ad spend, those that increase spend by less than 20% and those that increased spend by more than 20%. The pattern remained and can be seen on the chart below. Those businesses that invested in ad spend in the face of recession garnered positive results. 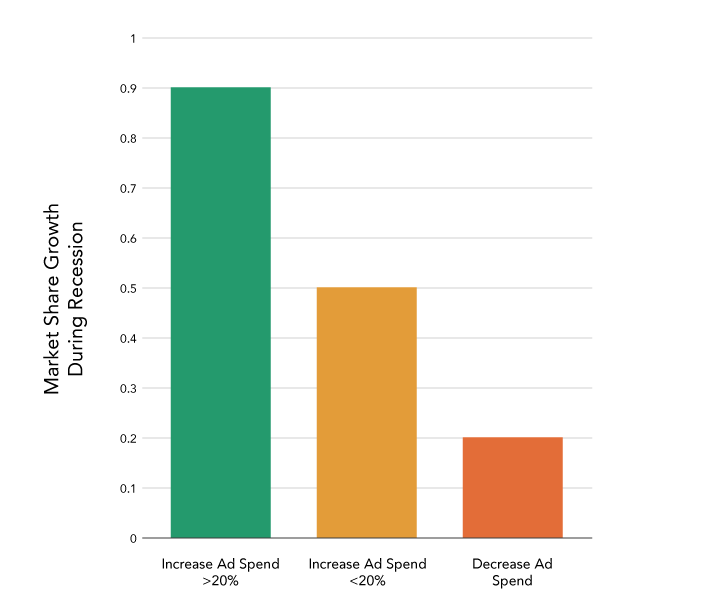 There is an additional key piece of research that must be shared with looking at advertising spend in recession, that is Research on Advertising in a Recession: A Critical Review and Synthesis by Tellis and Tellis

This father and son team collated over 40 studies around the impact of advertising on business success in recessionary periods, starting with Vaile’s research and looking globally for information around every significant recession since. One of their key conclusions reads;

From Research on Advertising in a Recession: A Critical Review and Synthesis
by Tellis and Tellis

How Big Brands Have Driven Growth During Downturn

The most recent economic crisis the world has undergone is, of course, that sparked by the advent of COVID-19 in early 2020.

In April 2020 Procter & Gamble publicised the fact they had taken the decision to ‘double down’ on marketing spend in the face of the pandemic and the predicted resulting downturn, stating

“We really do expect to come out of this stronger than we went into it. There is a bright future ahead and we need to be very deliberately keeping aware of opportunities and putting steps in place to seize those opportunities to fully serve consumers.

An article published in Campaign Live in August 2021 shows that P&G’s decision in 2020 paid off and the company saw significant organic revenue growth as a result of their clear-sighted strategy. “The company’s 12% annual increase, worth about $850m, in ad spend this year was ahead of organic sales revenue growth of 6%. On a “two-year stack” basis since 2019, the 21% increase compared to a 12% rise in organic sales.” Excerpt from Campaign Live. This is just one example of the academic research conclusions being played out in the real world and in real time. There are thousands more. In fact, a study led by Nitin Nohria found that 9% of global businesses came out of the global financial crisis of 2008 in better financial shape than they went into it, and that their success was predicated on a careful balance of selective cost reduction to enhance operational efficiency matched with comprehensive investment in the future with spend on marketing, R&D and new assets.

Unilever took a similar stance, if somewhat later than P&G, and in mid-2020 reported that they would be investing heavily in marketing, adding their marketing investment would be focused on maintaining market share and volume. CEO Alan Jope said, “We know from experience of many crises over the years that protecting volumes during a recession is the key to long-term competitive growth,” and “In fact, brands which grow volume during recessions tend to grow value share over the subsequent five years 1.4 times faster than those that don't”. Unilever took the scalpel over hatchet approach to spending cut in Q1 and Q2 of 2020, unlike many businesses, and were selective about how they readjusted the focus of their spend. For example, they reduced brand and marketing investment by 40% in food service and by 30% in ice cream. However, to respond to how consumers were behaving, they increased spend on skin cleansing and hygiene categories. As a result, Unilever saw significant increase in share of voice which, in H2 2020 was above 100, year to date.

Conversely, companies that react defensively to economic downturn by aggressively cutting spend and ‘circling the wagons’ have been found, through research and real world examples, to typically not emerge in an equal or improved position after periods of recession. Take Coca-Cola, one of the world’s largest advertisers, for example, who ‘paused’ their global advertising investment during the first half of 2020, and reported its largest decline (25%) in quarterly revenue in 25 years in July 2020. In December 2020 the company reported a 9% decline in Q3 revenue YoY.

Interestingly, the company doubled its advertising spend, back to near 2019 levels, in Q2 2021 in an attempt to regain lost position and consequently have seen positive results, with revenues exceeding that of Q2 2019. Though this rebound can also be attributed to the re-opening of venues and hospitality locations, key to Coca-Cola who rely heavily on out-of-home sales. So, history can teach a useful lesson if we care to learn it. Using the studies from Vaile, King and Tellis et al amongst others, as well as real world examples from actual brands, we can see that businesses that have maintained or increased their marketing spend, and crucially spent that budget wisely, during recession have typically benefitted.

They see increase in share of voice, achieve and maintain improved market share and win better long-term positioning as the economy recovers. Ultimately, carefully planned, robust investment in marketing when faced with economic downturn is part of the successful marketer’s playbook, a strategy designed to build stability and resilience, backed by decades of empirical evidence.

The Tried & Tested Playbook For Marketing In Recession

So, how do you go about planning a marketing strategy in recession? The goal is to think long term. Your aim is to survive recession but also leverage it as an opportunity to gain competitive advantage that persists once the recession recedes.

We know that advertising is effective over the long, as well as the short term when planned effectively but that the long term effects cannot readily be measured in terms of ROI. In a recession, as brands pull their spend, the value of advertising spend is enhanced, because of the diminished competition, leading to gains in share of voice that exceed existing market share. This is perhaps more easily explained in numbers so for example, if your ad spend is £2m and equal to 10% of the share of voice in the market, if your competitors cut, or pull their spend entirely, your £2m is now equal to significantly more than 10% of the share of voice available, leading naturally to gains in market share which your competitors will struggle to win back post-recession because of the time lag involved in driving change form a standing start. In fact, handled cleverly, a recession can offer savvy marketers a window of opportunity to leapfrog competition and drive market share long into the post-downturn world.

No examination of why marketing investment in times of recession is complete without reference to ESOV or Excess Share of Voice. The ‘excess’ refers to the margin by which share of voice exceeds share of market. It is commonly accepted, from many years of research on the subject, that ESOV is generally likely to result in sales growth. ESOV typically occurs when a brand additionally invests in marketing in a market where competitors are withdrawing or reducing spend (thus contracting the competitive field) and so delivering advantage to the investing business, claiming additional share of voice as a result. The idea is that market share and share of voice are generally balanced/equal and that, if a company increases its share of voice, the equilibrium will eventually be restored, leaving that business with a greater market share.

Whilst maintaining an eye on the long game, marketers must also keep careful watch on short term investment. The key is to understand your market and how the audience are reacting and spend accordingly. In the short term, particularly in non-essential markets, look at reining in immediate costs while the recession impacts your customers, in favour of investing in long term brand positioning and reinforcement. The key is in finding and maintaining. Balance between the two.

Of course, recession means losses, that may include a proportion of your target audience too. Clever marketers will look to see how they can leverage losses from other segments to compensate though. Perhaps more expensive or exclusive brands have lost a segment of their target market that you can now leverage based on quality, cost, etc? Or maybe your products and services can meet the needs of a displaced market, looking to meet a new, previously unconsidered need. Alongside this, your existing audience may also have changed and responding to their altered requirements can help mitigate against unavoidable losses.

Pricing is also a consideration. In a market with rising inflation set together with recession, static pricing can significantly impact profitability. The presentation of pricing is key and the context in which you present your pricing will determine how your audience perceive both your brand, your product/service and the value you are offering. There is a separate discussion to be had here about discounting but, with recessionary tactics in mind specifically, the evidence is clear that businesses should either commit to long term price reductions in order to access a more price sensitive customer pool, or maintain/increase prices supported with clearly explained reasoning.

Sounds like common sense doesn’t it, well, that it is. That, and knowing that recessionary periods rarely last more than two years so planning and strategising to build business through a recession isn’t the vague, never-ending, undefined task it might seem but an exercise in learning from what’s gone before to develop a short to medium term pan designed to leave your competitors behind.

Understanding the playbook for marketing in a recession is one thing, implementing a plan designed especially for your business is another. Partnering with an experienced digital marketing team can support your in-house marketing function to design, develop and roll-out the right recessionary marketing strategy for your business.

Talk to us about how to leverage economic downturn to drive business growth today. Our team of experienced real-world digital marketers are here to offer Just the Expertise You Need.